Oral fluid testing presents unique advantages such as the flexibility of performing on-site, observed collections and fast result turnaround times. Oral fluid testing begins to detect the presence of drugs soon after ingestion, making it an excellent indicator of recent use.

Today, both lab-based and instant oral fluid testing methods are available. Yet, a laboratory rendered and verified result adds an additional level of quality control and accuracy assurance to the process.

Value of an Accurate Test
Quality control protocols – e.g., a sample adequacy indicator on the collection device and specimen validity testing in the laboratory – are in place to ensure the integrity of specimens and results. In addition, a lab-based oral fluid test such as Oral-Eze® helps to ensure that an adequate amount of oral fluid is available for both screening and confirmation testing if needed.

Cutoffs and sensitivity
Cutoff levels and device sensitivity can vary widely among instant oral fluid drug testing devices. Regulations, including a number of states, require the use of an FDA-listed device. Remember, an instant test is only a screen, not a confirmation test. If a donor’s specimen returns a presumptive positive screening result, a follow up, laboratory test must be used to confirm the result.

Marijuana detection
A testing method that accurately detects marijuana should be a serious consideration for any company seeking to establish or maintain a drug-free workplace program. While instant oral fluid testing products may be able to detect the presence of marijuana, when compared to lab-based testing, they are often not sensitive enough to reliably render a positive test result. Said another way, when compared to lab-based testing, the cutoff levels used in instant oral fluid devices may be such that the majority (>50%) of marijuana users may go undetected. The latest Quest Diagnostics Drug Testing Index™ data shows the detection of marijuana in lab-based oral fluid testing increasing for a third consecutive year.

In addition, data published in the Journal of Analytical Toxicology demonstrates that Oral-Eze provides consistent and reproducible recovery and remarkable THC stability of from the point of collection through laboratory testing, storage and final disposition.

A Quest Diagnostics study helps to illustrate the difference to an even greater degree. During a more than 36-month period, more than 130,000 lab-based Oral-Eze® oral fluid tests confirmed positive for marijuana in our laboratory. When we examined the confirmation concentration, 43% confirmed at less than 15 ng/mL and 70% confirmed at less than 40 ng/mL. Simply stated, with a sensitive, lab-based cutoff, more than 130,000 marijuana positives were detected, whereas instant oral fluid tests on the same specimens would have detected 96,000 fewer positives.

Legal considerations
There are states that prohibit instant testing regardless of the specimen type. In these states, oral fluid testing is permitted but only via lab-based testing. Certain states also limit the circumstances in which instant testing devices may be used (pre-employment screening) or the type of instant device that can be used (FDA-listed devices only). Always consult with an attorney before implementing a drug testing program.

While both lab-based and instant oral fluid tests present advantages and drawbacks, if the goal of your company’s drug testing program is to accurately and reliably screen applicants and to create a drug-free workplace, the processes, certifications, sensitivity and legality of lab-based testing presents important considerations compared to instant drug testing alternatives. 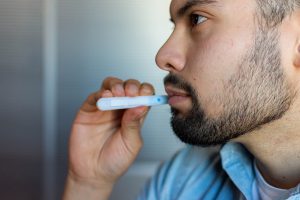