Cocaine is derived from the coca plant native to South America where many chew its leaves to squash pain, thirst, hunger, and fatigue. By the 1880s, doctors as famous as Sigmund Freud were studying cocaine as a “miracle drug” as an anesthetic for surgery and for a variety of health conditions including anxiety, addiction, and pain. However, by the turn of the 20th century, fatalities were associated with cocaine and an article in The New York Times by Dr. Edward Huntington Williams warned of the drug’s dangers, calling its effects “cocaine-craze insanity.” In 1914, Congress passed the Harrison Narcotics Tax Act which banned the non-medical use of cocaine in the United States. Today, cocaine is classified as a Schedule II controlled narcotic with a high potential for abuse, which may lead to severe psychological or physical dependence.

After an analysis of more than ten million workplace drug tests, cocaine made headlines in this year’s Quest Diagnostics Drug Testing Index™ (DTI) report because its positivity rose 12% in 2016, reaching a seven-year high of 0.28%. The data also pointed to a trend of consecutive year increases of cocaine positivity rates for both the federally-mandated, safety-sensitive and general U.S. workforces. Over time, cocaine positivity has fluctuated in the U.S. general workforce with its highest level of 0.91% in 1998 and its lowest positivity rate of 0.23%in 2012 according the the DTI.

“In addition, the positivity rate for cocaine in post-accident urine drug tests was more than twice that of pre-employment drug tests, and was also higher than the rate in random drug tests for both the federally-mandated, safety-sensitive and the general U.S. workforces. While a positive test doesn’t prove drug use caused the accident, it raises the question as to whether it played a role,” said Barry Sample, PhD, Senior Director of Science and Technology, Quest Diagnostics Employer Solutions.

The most current findings from the National Survey on Drug Use and Health tell us:

Visit QuestDiagnostics.com/DTI for the full report and data.

See cocaine positivity rates by 3-digit zip code in the United States for the past 10 years, visit QuestDiagnostics.com/DrugMap. 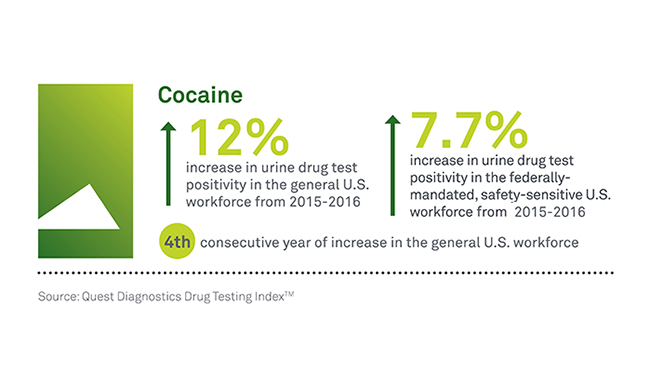