Our By the Numbers series takes a closer look at the numbers, facts, data, and outputs that impact workplace drug testing programs. In this post,we take a closer look at positivity by drug which the Quest Diagnostics Drug Testing Index™ (DTI) measures using a combination of three factors: drug category, specimen type, and workforce segment.

The Drug Testing Index is the most comprehensive compilation of workplace drug testing numbers that industry, government, media, and employers rely on for data and insights. Five-year snapshots are used to help identify trends in positivity rates. If the positivity rate changes in the same direction for several years and/or is observed across multiple specimen types, it may be viewed as a trend.

In the latest (2015 data) DTI analysis, Dr. Barry Sample, Senior Director of Science and Technology, Quest Diagnostics, reported that the rate of amphetamine and heroin detection in urine drug tests and the rate of marijuana detection in oral fluid drug tests has increased annually for the past five years in the general U.S. workforce.  Our infographic illustrates the following key insights from urine drug testing:

These numbers highlight that individuals in the workforce continue to use and test positive for amphetamine, marijuana, and heroin.  In fact, the most recent data from the National Survey on Drug Use and Health (NSDUH) reports that 67 percent of drug users are employed. For that reason, employers should remain diligent in their efforts to combat substance abuse in the workplace.

To review all of the data, download the Drug Testing Index brochure. 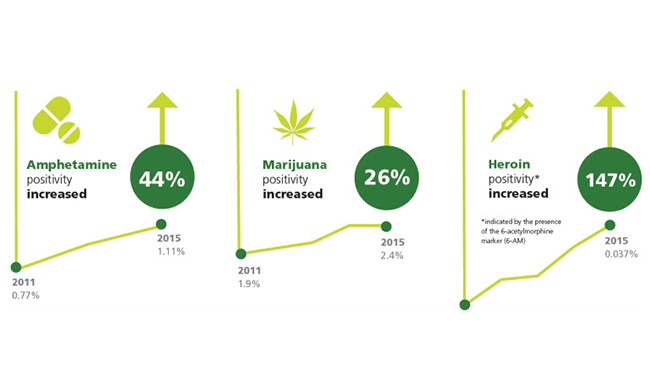