Regardless of where we live in the world, socioeconomic status can influence our life experiences. From the neighborhoods were we grow up, to the extracurricular activities we take part in, many times the circumstances into which we are born can predetermine our futures and the futures of the generations that follow. According to the American Psychological Association, “socioeconomic status is a key factor that influences quality of life for children, youth and families… [and] affects human functioning in many ways, including development across the life span, psychological health and physical health.”

According to  2016 World Drug Report from the United Nations Office on Drugs and Crime, economic growth and poverty are the two most relevant factors in analyzing the links between economic development and drug use around the world. Although lower socioeconomic status is oftentimes quickly linked to a higher prevalence of drug use, research shows the association may not be completely accurate. For example, in the United States, the use of crack cocaine is regularly attributed to lower income communities, but in reality the difference in purity and price between crack cocaine and the powder version we sometimes associate with higher income users is minimal.

In addition to income, there are multiple factors that play into why certain drugs are more commonly used in certain parts of the world: 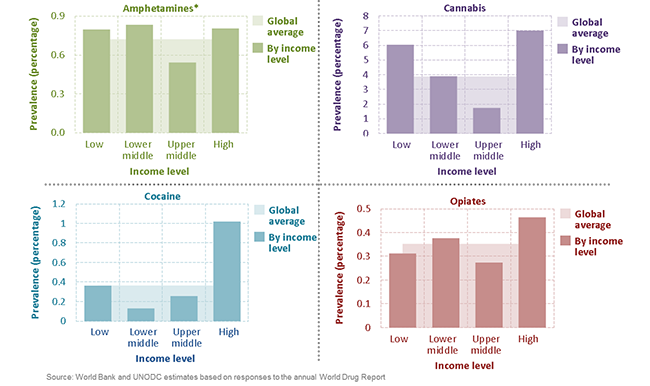 The graphic above, courtesy of the World Drug report depicts higher socioeconomic status’ influence on drug use, poverty however, is strongly associated with substance abuse disorders. According to the Diagnostics and Statistical Manual of Mental Disorders, Fifth Edition (DSM-5), “substance abuse disorders occur when the recurrent use of alcohol and/or drugs causes clinically and functionally significant impairment, such as health problems, disability, and failure to meet major responsibilities at work, school, or home.” The difference being that drug dependent people in countries with wide income inequality gaps are trapped in a vicious cycle of hardships and drug use due to factors which include:

That said, not everyone who lives in a poor community will become addicted to drugs. However, poverty does have strong associations with drug use disorders, whereas countries with middle or higher socioeconomic classes, tend to have a higher prevalence of “recreational” drug use and lower levels of addiction.

For more information about international drug testing, visit our website.