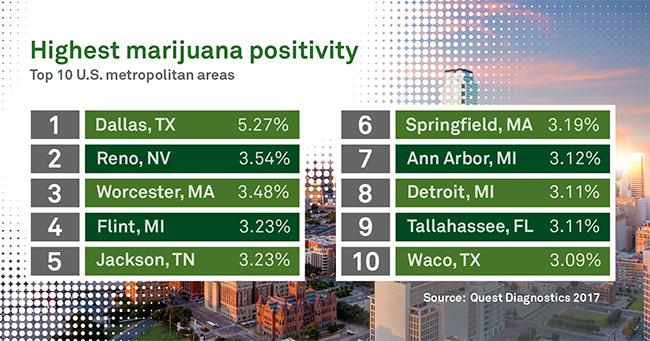 Our interactive drug testing map reveals the 10 states with the highest marijuana positivity rates in 2017, averaging 2.96%.

Interestingly, when you examine the highest positivity for marijuana in a metropolitan area, only three of the areas are located in one of the top 10 states.

Dallas and Jackson are both metropolitan areas where marijuana is not legalized for medical or recreational use, yet they rank in the top cities for marijuana positivity. Another anomaly is that Texas did not make the top 10 states, yet it has two cities on the top 10 list. California is not represented on either list despite the fact that marijuana is legal both medically and recreationally.

Given these results, the stereotype of marijuana use as solely a “big city” problem is inaccurate. With the rate of positive workforce tests continuing to rise, and with pockets of higher positivity throughout the U.S., it is even more important for employers to be aware. Employer drug testing programs continue to be an important part of maintaining a safe, productive and drug-free workplace.

To see drug positivity in your city, visit DTIDrugMap.com.