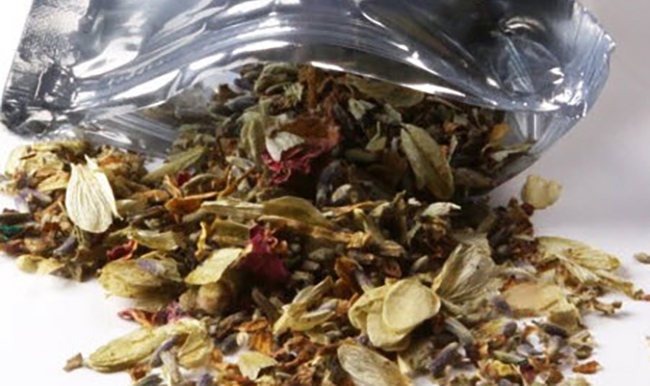 “Herbal incense” has gained increasing media attention of late, as an “alternative” or “legal high.” It goes by a number of names – K2, Spice, Genie, Yucatan Fire and many others. In these products, plant material that does not contain marijuana or other psychoactive plants, is surreptitiously sprayed with one or more chemicals. While the chemicals in these substances target the same receptors as marijuana/THC, and produce a similar euphoric high, it is important to note that these chemicals are engineered and not “naturally occurring”.

The dried, treated, organic plant material is packaged and sold over the Internet or over the counter in some stores. These products are abused similarly to traditional marijuana – by smoking like a cigarette; inhaling the smoke from an open container or pipe; or by ingesting the dried, leafy contents.

Early evidence suggests that these non-FDA approved chemical substances are more potent than THC. The use of these substances may lead to a series of harmful effects including the potential for increased dependence and the possibility of overdose, in addition to other adverse physiological effects.

What are these products?
The purveyors of these “synthetic marijuana” products claim that they are selling “herbal” and “incense” blends or that the products are composed of “natural essences.” While the actual plant components listed on the label may differ slightly, materials common to many of these products include: Baybean, Lion’s Tail, Indian Warrior, Maconha Brava, Marshmallow and Siberian Motherwort. The plant material may also be scented with flavors such as vanilla, honey, strawberry, cherry or blueberry.

What’s not listed on the label are the chemicals that are sprayed on the plant material. These chemicals are the active ingredients that act on the cannabinoid receptor(s) responsible for marijuana/THC’s effects. The chemicals were originally synthesized by researchers and pharmaceutical manufacturers studying possible therapeutic uses for drugs interacting with the cannabinoid receptors. Some of the synthetic cannabinoid receptor drugs that have been identified in these “herbal” blends include: HU-210, homologs of CP 47,497, JWH-018, JWH-073, JWH-250, and JWH-398. In addition, vitamin E, caffeine, menthol, and chromium have been identified in some “herbal incense” samples examined by researchers. It is interesting that many of these misrepresented “herbal” products carry a warning that “Contents are non-toxic and are NOT approved by the FDA for HUMAN CONSUMPTION.”

The manufacturers of these “herbal incense” products may apply one or more of these synthetic chemicals to their product. Moreover, the substance(s) applied to the plant material has been shown to vary between products and even between batches of the same product. Consequently, K2, Spice and other “herbal incense” blends are not a single product/drug, but a family of substances that may be abused for their “high.” Another aspect of concern is that the amount (dose) of the synthetic substance(s) applied may be inconsistent, which may further complicate any adverse effects associated with the use of these substances.

Are they dangerous?
Many of the synthetic compounds added to these products would be expected to produce marijuana-like effects through their action on the cannabinoid receptor. However, unlike THC and marijuana which have been studied extensively, very little is known about the dose, effects, metabolism and toxicity of these substances. All of the published studies with the synthetic compounds have either been in-vitro or in animals – there have been no published, controlled human studies, to date.

What is known is that many of these synthetic compounds are more potent than THC – potentially, more than 50-fold in one instance. Given the higher potency and inconsistency in the amount and specific substance(s) applied to the plant material, the risk of overdose and adverse psychiatric effects is possibly greater than with marijuana/THC. The length of time users feel the effects is also different as compared with THC – with the effects lasting for a shorter period of time for some substances and longer for others. In one published study, the researchers reported feeling “minor after effects the whole next day.” Furthermore, there is a published study suggesting that tolerance to these synthetic drugs occurs more rapidly which could lead to a greater risk for dependence.

Other adverse effects include dry mouth, increased heart rate, feelings of impaired motor skills, agitation, unconsciousness and altered mood and perception. The chemical structure of some of these synthetic compounds has led to speculation of carcinogenic potential and the presence of other contaminates such as chromium and caffeine all raise toxicological concerns. Clearly, controlled studies are needed to assess the full-range of risks associated with these “herbal incense” products and “synthetic marijuana” compounds.

Legality and restrictions
Unlike drugs of abuse like marijuana, cocaine, heroin, methamphetamines or PCP, most of the chemicals added to “herbal incense” are not listed as controlled substances by the United States Federal Government. At this point, only one of these substances – HU-210 – is classified as a controlled substance due to the fact that it is a cannabinoid that is structurally and pharmacologically similar to THC. While a handful of states are taking legislative action against “synthetic marijuana”/“herbal incense” products, only two – Kansas and Kentucky – currently have laws in place that limit the distribution, possession or consumption of K2, Spice, other related products and/or the synthetic compounds added to these products. At least two other states have passed laws which are pending signature by their respective governors. Legislation has been proposed or passed in at least one chamber of seven other states.  Spice is also reportedly banned by some U.S. military commands and there are a number of countries in Europe that have banned K2, Spice or similar products.

Drug testing
When a user ingests traditional marijuana, THC is the chemical that affects the receptors in the brain and creates the high. The body metabolizes THC and eliminates it from the system in the urine. When a urine drug test detects “marijuana”, it is actually detecting a marijuana metabolite – carboxy-THC. It is not known how, or to what extent, these “synthetic marijuana” compounds are metabolized. Furthermore, as K2, Spice and other related “herbal incense” products are not composed of a single substance, any laboratory analysis would need to test for a variety of “synthetic marijuana” metabolites. Therefore a urine drug test for K2, Spice, or “synthetic marijuana” metabolite(s) is not feasible at this time.

Since there are currently no drug tests for “synthetic marijuana” or “herbal incense”, the only way for concerned employers to limit the abuse of this chemical is through sound policy development. For example, employers could include a provision prohibiting the use and/or possession of these substances while on company property or business, similar to many employer policies regarding alcohol. This approach could be especially relevant in states that have passed laws regarding the distribution or use of these “synthetic marijuana” or “herbal incense” products.  The aforementioned is not legal advice and employers wishing to develop such a policy should consult an attorney licensed to practice law in their state.